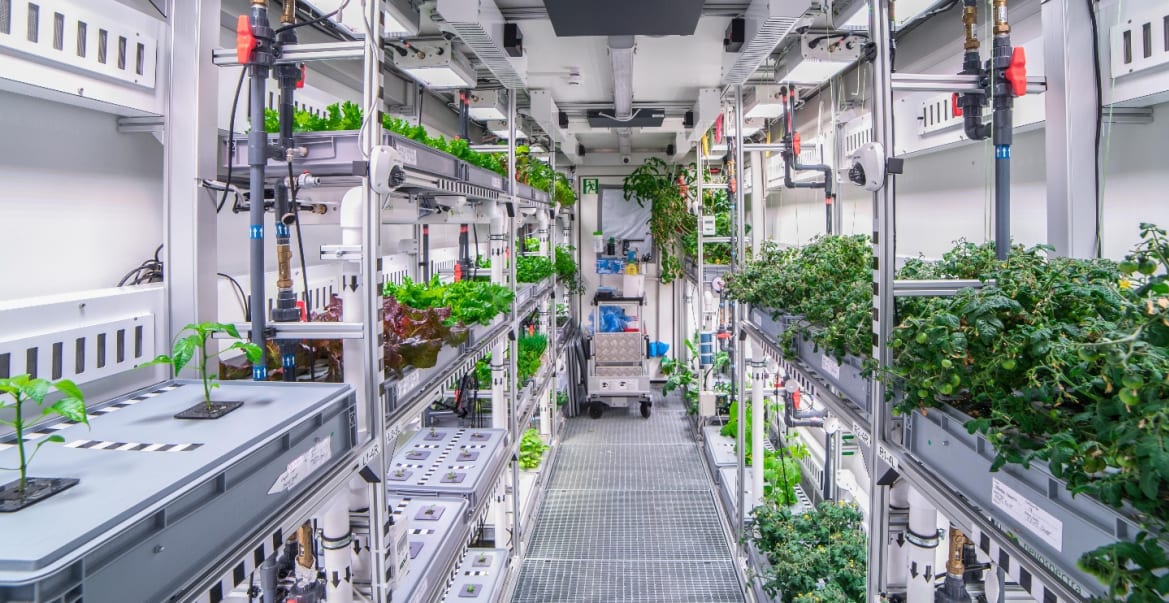 Daniel Schubert of the German Aerospace Center explains the special challenges in putting a greenhouse on Mars, why the technology behind it could also help us here on earth, and what all this has to do with urine.

The weather at Daniel Schubert’s home in Bremen, where he is the project director at the German Aerospace Center’s Institute of Space Systems, is not particularly good at the moment. But he can’t complain. Because while the 46-year-old is making himself comfortable in front of a webcam in a heated room, the temperature in the Antarctic – where all his hopes lie – is well below freezing. That’s where Schubert’s team is growing tomatoes and vegetables in a repurposed shipping container next to Neumayer Station III, a polar research facility of the Alfred Wegener Institute. If everything goes as planned, it will be possible to cultivate various crops on Mars - and perhaps even very soon.

Mr. Schubert, right now you're raising tomatoes, cucumbers and radishes in the Antarctic. Wouldn't it be easier in Spain?

That would be easier, of course, but it would not serve our purpose. Conditions in the Antarctic are currently quite similar to those we can expect to encounter on the moon or Mars: Temperatures of minus 50 degrees Celsius, absolute darkness and wind storms. We can’t simulate the expected conditions any better than that. In addition, the nine-member crew is completely cut off from the world for nearly nine months, because there are no flights or supply ships to Antarctica for that long. They are completely isolated from the outside world, and it wouldn’t be any different for a moon or Mars operation.

You’re growing herbs and vegetables inside a container, not out in the cold. What are the prevailing conditions like?

The container is located about 400 meters from the polar station and runs completely automatically most of the time, so the systems are being tested under actual conditions. The conditions are similar for the plants. A thermal system keeps the temperature between 20 and 22 degrees and the humidity around 70%, although the concentration of carbon dioxide is about twice as high as in a normal garden, which helps the plants grow faster.

So you’ve set up a conventional greenhouse in the Antarctic?

There are some differences. For example, we’re not allowed to use soil. It is prohibited in Antarctica because of the fear that microbes could ruin the ecosystem. That’s one of the reasons the plants are set in what we call "root compartments," which are lightproof tubs that are automatically sprayed with a very specific mixture every two to five minutes, whereby the water underneath them is of course recovered. Water-cooled LED lamps also ensure the plants get enough light. We’ve developed systems to regulate everything from the temperature to the humidity, so future astronauts don’t have to spend all their time in the greenhouse. At the moment we only go in there when we need to check something. 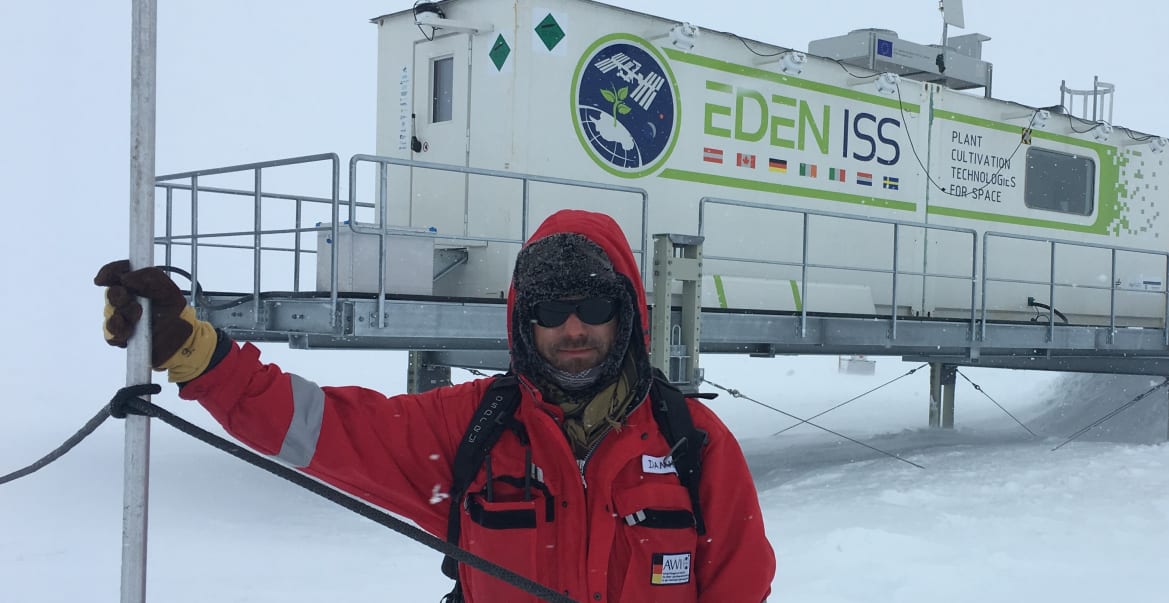 How is it working so far?

In eight months we have produced about 300 kilograms of food on 13 square meters. I think that’s a pretty good quota. Theoretically it could even be more; the potential is the subject of an on-going scientific debate. These 300 kilograms are not enough to feed an entire manned space expedition, but they represent a good side dish to more satiating foods, and of course a fresh salad is always a valuable addition. We deliberately do not grow foods that can be stored dry, like rice, potatoes or any kinds of flour, because it is easier to transport them. But a cucumber goes bad after two weeks, as everyone knows from their own refrigerator, and that is due to its water content. We can’t fly them from earth to Mars. That’s why we grow them.

Is your greenhouse meant for travel or as a stationary installation?

It supplies the astronauts on Mars, so it’s stationary there. There are other institutes and companies taking care of the long journey to get there. We are developing greenhouse systems for the surface of the planet, whether on the moon or Mars. The technology is already ready for implementation today. We could plant tomatoes on Mars. All that is still lacking is the political will.

Why should we grow cucumbers on Mars in the first place? Isn’t that more of a luxury than a necessity for astronauts?

There is certainly a feel-good factor in eating a cucumber or tomato from time to time alongside rice or potatoes. But a greenhouse also has many functions in which humans and plants complement each other, and they can be essential for survival. Plants produce oxygen, for example, which we need to breathe – and they can also serve a purpose in sewage treatment in the future. We are currently working on processing human urine so plants can absorb it as a nutrient and sweat it out again through their pores. This water in turn becomes drinking water for astronauts. This is a beneficial cycle.

Speaking of cycles – where do you get the energy from?

At the moment, unfortunately, we’re getting the power from a diesel generator, because that was all we could afford. But on Mars the topic of energy will play a completely different role; we’ll certainly be experimenting with solar panels, perhaps even with a nuclear power plant. But that’s not our area of research; we consume energy rather than creating it.

An ecologically closed cycle that requires little cultivation area sounds like a good idea on earth, too.

In fact, the efforts in the area of vertical farming are very similar to ours. It can be done on Earth, of course, and is in fact already being done. It’s certain to become an important technology in the future. It can also help us reduce the detrimental effects of agriculture and allow the Earth to recover from the hardships humans have put it through. We are much more specialized, of course, because we filter water out of the air, for example, because you can’t open the window on Mars.

Vertical farming is still just a niche at the moment. Do you see more potential there?

Indeed, I see tremendous potential there. We could feed the whole of humanity on a large scale, no question about it. As far as mass production is concerned, some companies are already quite advanced.

What’s preventing an initiative like yours from bringing these solutions to the market today, or to the moon?

We lack research funds, equipment and a budget. Our entire team comprises just four people and one NASA scientist who is currently spending the winter in the Antarctic. We need at least 40 people. But we need political support in order to do more.

You yourself are planning to abandon the project in 2023. Is that also due to money?

We’re not abandoning the project, just our current container. It was only retrofitted to meet our needs. Now we want to connect a completely new structure directly to the station. It will be more cylinder-shaped and will incorporate a number of improvements. That will be the module that we could send to the moon or Mars. 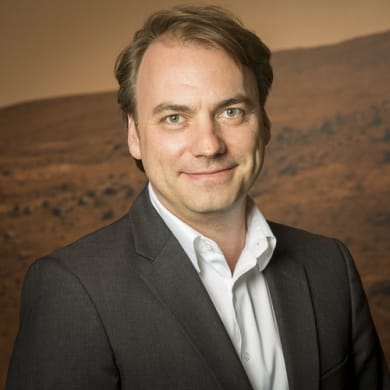 He earned his engineering degree specialized in aerospace and production technology at the Technical University of Berlin. In 2011, he initiated the “EDEN” group for bioregenerative life-support systems at the German Aerospace Center for Technological Research, and has led it ever since. He is also head of the EDEN ISS project, which operates the greenhouse in the Antarctic. 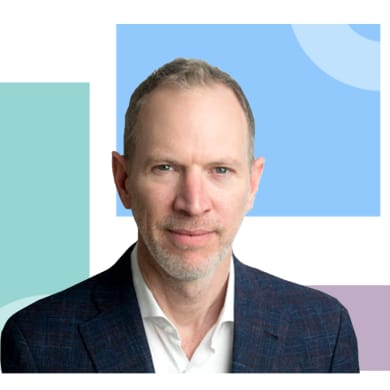 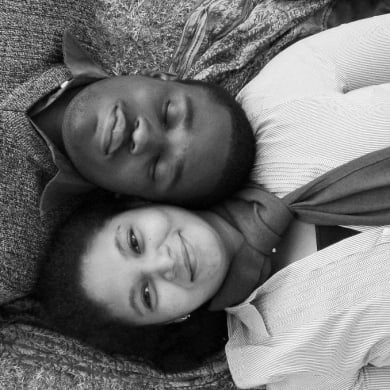